Did you know that the Mille Lacs County Public Works Department is responsible for approximately 410 miles of county roads and county state aid highways. The State of Minnesota, townships, and municipalities are responsible for all other roadways in the County. 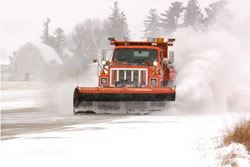 Snow removal times can vary depending on moisture content of the snow, weather conditions, and on when the snow fall occurs. A snowfall that occurs during the heavy traffic times will cause more problems than snow falling from midnight to 3 a.m. Heavy, wet snow followed by a cold snap could require more time to clear than dry snow.

Fully equipped trucks weigh as much as 15 times (70,000 pounds when loaded) more than an average car.

Salt melts snow and ice on roads when road surface temperatures are below freezing. Salt gets less effective as temperatures drop.

As a general rule snow removal is conducted during daylight hours. This is to help maximize safety and efficiency. Whenever possible snow removal will start at 5 a.m. and is discontinued at 5 p.m. To minimize driver fatigue every effort is made to limit driver shifts to 12 hours. Work may continue for several days after a snow event to remove drifts, push back snow banks, and address problem areas.

All operators are required to have a valid Class A Commercial Driver's License. Snowplow trucks are dispatched from three locations in the County:

When Snowplows are on the road please keep the following in mind!

Snowplows travel much slower than the posted speeds. As in most large trucks, the driver's field of vision is severely restricted immediately in front of and to the rear of the truck. The driver must rely on the mirrors to see the rear and to the side. 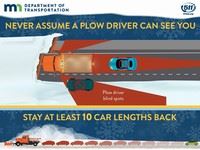 Stay back at least five car lengths behind the plow, far from the snow cloud. Snowplow operators will pull over when it is safe to do so to allow traffic build-up to pass.

Be patient and remember snowplows are working to improve road conditions for your driving safety.

Snowplows turn or exit frequently and often with little warning, they may also travel over center lines or partially in traffic to further improve road conditions.